There has been a “staggering” rise in natural disasters over the past 20 years and the climate crisis is to blame, the United Nations said … pointing to a failure of political and business leaders to take meaningful action to mitigate the impact of climatic change and stop the planet from turning into “an uninhabitable hell for millions of people.”

Meanwhile, the coronavirus pandemic, which has killed more than 1 million people and infected at least 37 million, has exposed the failure of “almost all nations” to prevent a “wave of death and illness” despite repeated warnings from experts, the report said.
Between 2000 and 2019, there were 7,348 major natural disasters — including earthquakes, tsunamis and hurricanes — that claimed 1.23 million lives, affected 4.2 billion people and resulted in $2.97 trillion in global economic losses, according to the UN Office for Disaster Risk Reduction (UNDRR).
That’s almost double the 4,212 disasters recorded from 1980-1999, the UN said in its new report The Human Cost of Disasters 2000-2019.
The Center for Research on the Epidemiology of Disasters’ Emergency Events Database characterizes a natural disaster as having at least 10 or more people reported killed, 100 or more people reported affected, declaration of a state of emergency, or a call for international assistance.
The vast majority of those disasters were climate-related, with researchers reporting more flooding, storms, droughts, heatwaves, hurricanes and wildfires in the past 20 years. 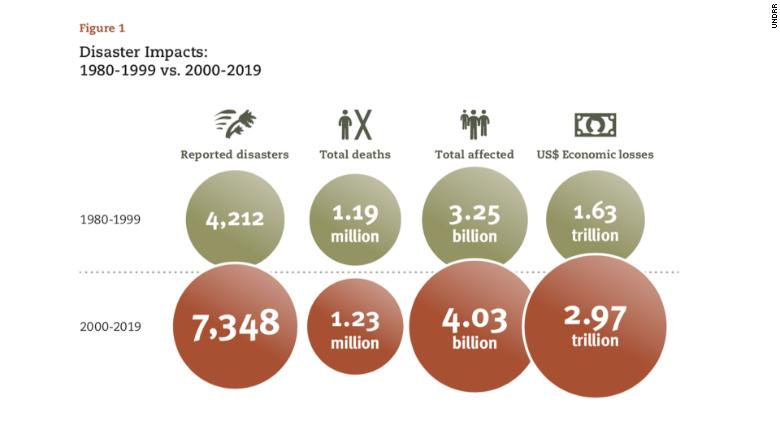 The sharp increase has been attributed to rising global temperatures, which scientists say is increasing the frequency of extreme weather and disaster events. The report found floods, storms, heatwaves, droughts, hurricanes and wildfires have all significantly increased in the past 20 years.
“It is baffling that we willingly and knowingly continue to sow the seeds of our own destruction,” said UNDRR chief Mami Mizutori and Debarati Guha-Sapir of Belgium’s Center for Research on the Epidemiology of Disasters, in a joint foreword to the report.  “It really is all about governance if we want to deliver this planet from the scourge of poverty, further loss of species and biodiversity, the explosion of urban risk and the worst consequences of global warming.”
Asia was the worst hit from climate disasters in the past 20 years, suffering from 3,068 disaster events between 2000 and 2019. That was followed by 1,756 disasters in the Americas and 1,192 in Africa.
The worst affected country over the past two decades is China, which experienced more than 500 natural disasters, followed by the United States, with 467 disaster events.
Among the deadliest — considered mega disasters because they each killed more than 100,000 people — were the 2004 Indian Ocean Tsunami, the 2008 Cyclone Nargis in Myanmar, and the 2010 Haiti earthquake. 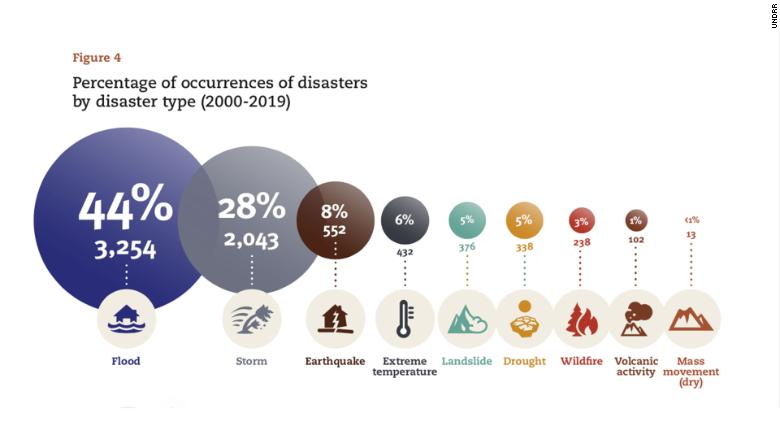 There has been some success in protecting vulnerable communities thanks to better early warning systems and responses, the report said. Disaster management agencies in countries like Bangladesh and India have saved many lives through better preparedness for cyclones and floods.
But researchers warn that “the odds continue to be stacked against” these communities.
“In particular by industrial nations that are failing miserably on reducing greenhouse gas emissions to levels commensurate with the desired goal of keeping global warming at 1.5 ̊C as set out in the Paris Agreement,” Mizutori and Guha-Sapir said.
They called on countries to do more to strengthen disaster risk governance and to better prepare for future climate catastrophes.
Currently, the world is on course for a temperature increase of 3.2 degrees Celsius or more, unless industrialized nations can drastically cut their greenhouse gas emissions.
That projected temperature increase is enough to increase the frequency of extreme climate events across the world, the report said, rendering any improvements to disaster response or climate adaptation “obsolete in many countries.”
Emissions will need to be reduced by at least 7.2% every year over the next 10 years in order to achieve the 1.5 degree target agreed in Paris.
“We have seen little progress on reducing climate disruption and environmental degradation,” said UN Secretary-General António Guterres. “To eradicate poverty and reduce the impacts of climate change, we must place the public good above all other considerations.”
https://www.cnn.com/2020/10/13/world/un-natural-disasters-climate-intl-hnk/index.html
@SteveHochman2020-11-29T16:41:24-08:00December 14th, 2020|